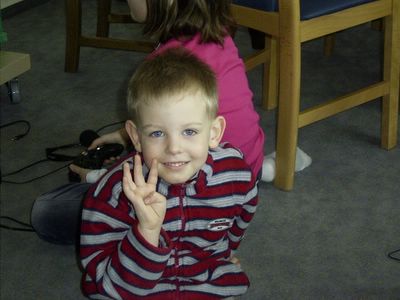 Cian is 4 as of Friday :) We celebrated with vanilla cupcakes with pink icing and Bob the Builder wafers on top.

And Craig the Super Engineer has a sock, with another on the way. Not like he'd ever know because he never visits us anymore. 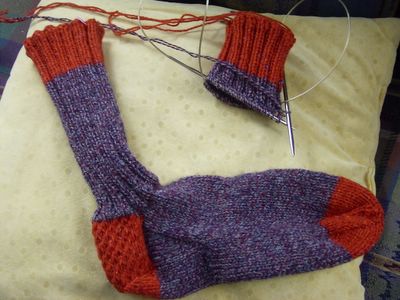 I sent him a text message this week telling him his hat was finished and that my spinning wheel was squeaking. The reply came back that he was in Stuttgart and leaving to Spain in the morning. Well, well, well - however so much I hate to disturb the most-important jetsetter :)
Miss him and hope to see him again soon!!
Posted by Kathleen in Ormond Beach at 8:53 AM 6 comments:

A Stocking in Rhyme

Posted by Kathleen in Ormond Beach at 3:31 PM 2 comments:

That's how much my first satisfactory homespun weighs, skein by skein, all of it 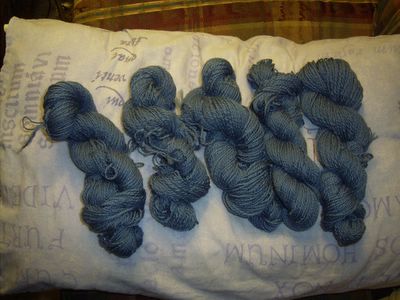 Haven't a clue as to what I'm going to knit it into, but I don't mind staring at it for a while :)
Posted by Kathleen in Ormond Beach at 4:48 PM 1 comment: 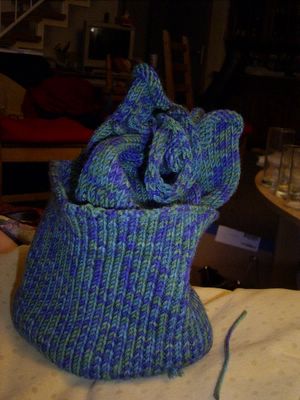 Photographic evidence that I am folding challenged. I followed the directions exactly but it looks a tad different than at knitty.com. 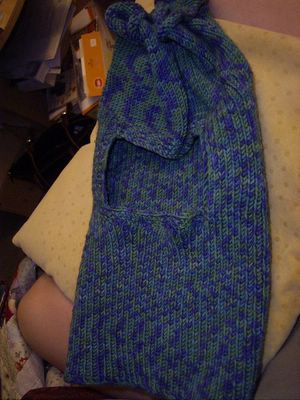 And for some reason, it looks a bit quirky on my head, so I forced the Irishman to model for me :) 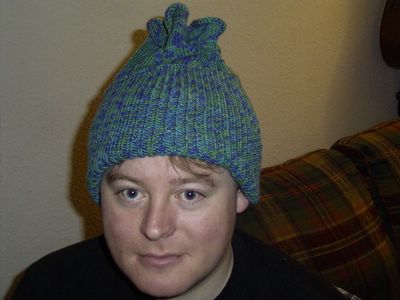 Hurry up and take the feckin photo you eejit

Hopefully it will look better on Craig, the Super Engineer. He gets socks, too. And dinner anytime he wants. Because, when I first started to spin the pretty blue stuff, the wheel was ripping it right out of my hands and I thought it was due to the wool. I figured I was getting just what I deserved since I didn't check to see exactly which sheep it came from. But, after SE checked out my wheel and got me to buy new spools, the blue stuff started spinning up like a dream. Now I've got at least 100g and more to wrap off of the spools. 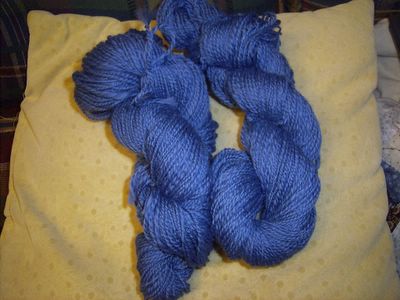 Hmmmm...what to make, what to make....
Posted by Kathleen in Ormond Beach at 1:55 PM No comments: 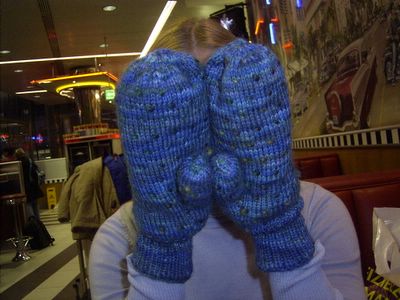 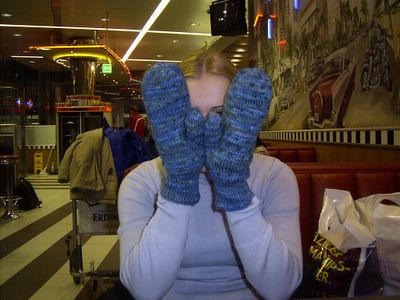 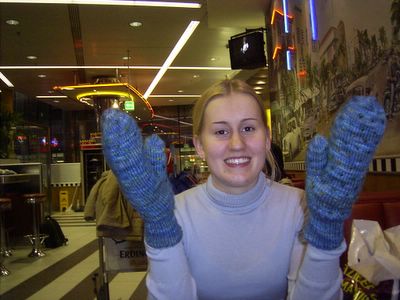 Pauliina the au pair finally got her Christmas thrum mittens. Just in time for her return to Finland **SOB** We will miss her a heckuvalot around here, even though she was only here for 4 months it's like our little sister went off to college. She's promised to return in August for the Annafest in Forchheim.

Pauliina, we miss you!!
Posted by Kathleen in Ormond Beach at 2:03 PM No comments:

I'm watching the season premier of the L word tonight (which has had me waiting WAY too long for a season premier) and Alice is learning to knit. 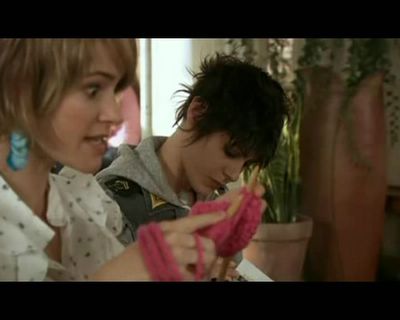 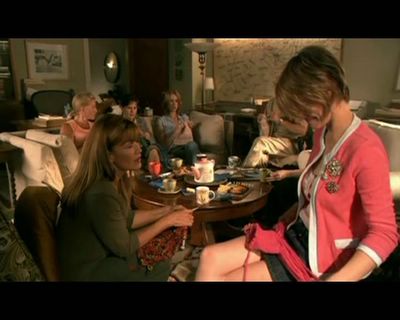 And all I can come up with is furry scarves....but, there is also the NOA 3 in 1, but I'm not finished yet - maybe tomorrow :)
Posted by Kathleen in Ormond Beach at 12:18 PM No comments:

Styling in the Snow

Baby Kerry with brother Jim and his wife Chelle in NC's version of a snow storm. 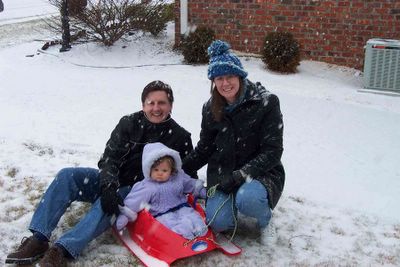 Chelle got a hat/scarf set from me for Christmas a couple of years ago and here she's trying to butter me up for a pair of socks ;)

And what a horrible Auntie am I that this poor child has nothing woolen on her head???? Ok, guys, thanks for the photo - I feel appropriately guilty and will make sure she has something soft and furry for next year :) Not that I mind.....
Posted by Kathleen in Ormond Beach at 2:14 PM No comments: 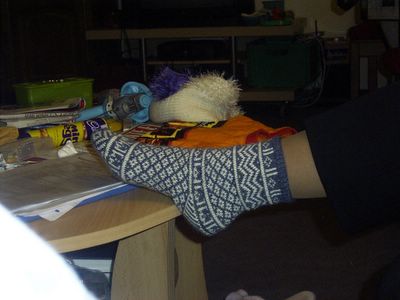 She loaned me the Folk Socks book and wrote a oh-so-subtle note about how cute these socks would be. Favourite daughter that I am (oh yes, I am - she told me in confidence, so she probably wouldn't talk about it again - but I'm the Favourite) I knit them up and held them ransom in Germany. And it worked, she drove through the Chunnel, across Brie land and through fields of sauerkraut to get her socks - and see me :)

And, along the lines of the-apple-didn't-fall-far-from-that-tree: as I sat thrumming my last thrums of my life (should God be so gracious) Mum was knitting up socks for Papa Bear. He of the "don't you dare knit me socks because my mother used to knit me socks and oh-God! the guilt that went with the socks, but oh, those aren't bad, maybe you could just knit me a pair of those, and those,too and those aren't bad either...." 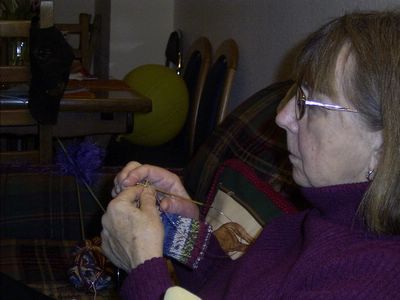 Do you see what's on the arm of the sofa to her right? Do ya? Huh? Huh? That's MIL's knitting. I passed on two balls of Fun Fur and she's already got a very schnazzy scarf in the works. I swear, if I had a cat, it would knit, too.
Posted by Kathleen in Ormond Beach at 5:42 PM 2 comments:

My mommy came to see me and yooouuurs didn't :)
Well, I don't know maybe she did. I don't even know who I'm nanny-nanny boo-booing, but it feels right because tonight is my Christmas!

Mom and Dave have been teasing me for 3 years that they would come over from England to visit me and didn't make the trip until today. Sneaky little buggers didn't even tell me they were coming.

I got a call this evening from them telling me that they had UPS on the phone who was trying to deliver a perishable package to me that Mum had sent and couldn't find my house. I spent 30 minutes on the phone with them and driving around my neighborhood trying to meet a UPS man at some Shell station for my package. Seriously, Dave and I left the apartment to find a UPS guy that said he'd wait at some Shell station until we arrived - I totally didn't get it. Not the brightest crayon in the box now, am I? Finally, Dave took the mobile off of Mum and said, "dammit - we're the package. Now come pick us up."

So we did and now they are home and I was able to bury Mum in all the yarn I had found and things I had knitted her and Mum buried me in mohair and knitting books from England (and Cadbury's!!!) Dave and the Irishman drank a weizen beer and laughed at us from across the room.

Now, I present picks of Mum in the hat I knit for her out of the handspun alpaca she sent me last year. 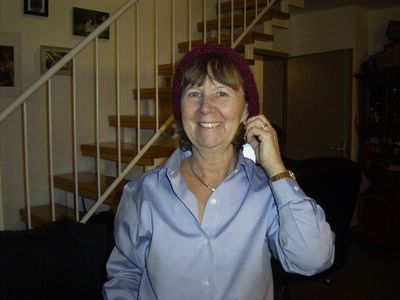 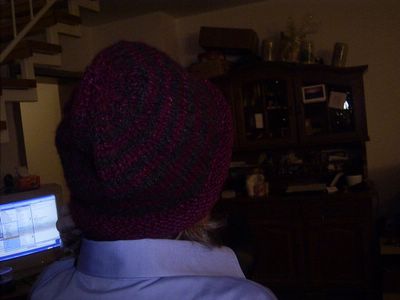 And updates of the Dublin Bay socks, which I am deciding I really really like to knit. 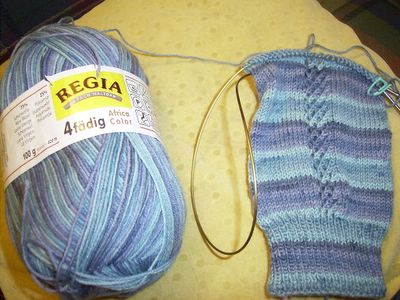 Pattern is fairly simple, yet keeps my interest and looks great - 'specially with dem stripes.

Posted by Kathleen in Ormond Beach at 4:50 PM No comments:

I finished my Wickin' socks tonight :)) 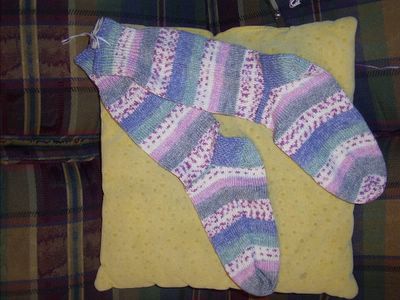 And was trying to decide which sock yarn wanted to be Dublin Bay Socks. 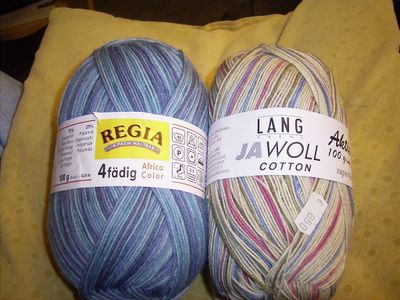 Upon moving the sock yarns off of the specially-designated photo pillow, I felt something hard in the Jawoll cotton. I reached inside and found matching Beigarn - which I imagine is extra yarn for the heel; being that it's a bit thinner than the wool/cotton thread itself. 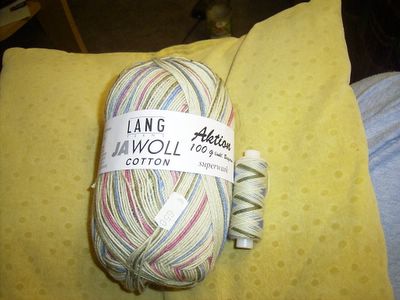 Not that I'm like super-experienced, been-buying-sock-yarn-for-decades person, but I have bought my fair share in the past 2.5 years (boy! have I ever) and I've not seen anything as clever as this yet. Too bad this is the only Jawoll sock wool I've seen so far and there were only two colours in cotton, nuthin in wool/nylon mix yet. Must check google.de and see what else I can come up with.

Until then, I need to decide which yarn wants to become a Sitcom Chic Cardigan.
the blue/beige cotton or the blue/yellow/navy wool. I'm very curious to see the effect of worsted-weight variegated on a cardigan knit in the round (ish). 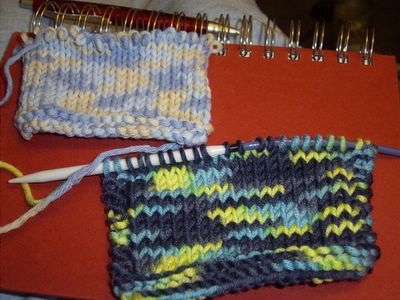 Yep, that's my household tonight - full of excitement and yarns competiting against each other to become my next project. I bet the Irishman is glad to have escaped to the Traditional Irish Music session at the pub tonight. And to think I use to wonder why his eyes glazed over when I started to talk about gauge....

Posted by Kathleen in Ormond Beach at 4:02 PM No comments:

So much sock yarn... 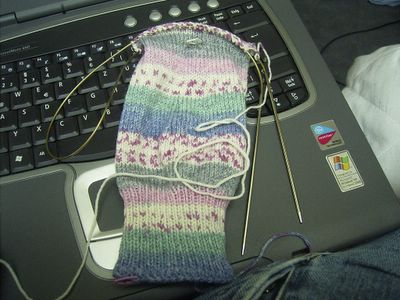 This one seems to be taking FOREVER now that I found another cool yarn from Fortissima to try out.

It is veredlt with Rosskastanien. Which means they process it with horse chestnut to help tired and swollen feet :) How cool is that, I ask you! 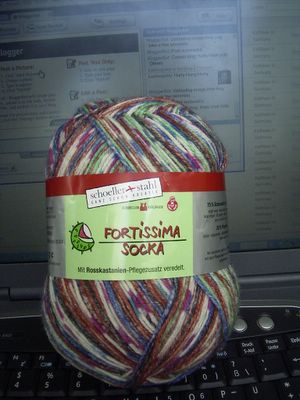 Can't wait to see how the pattern turns out - but I'm fairly certain who's getting to try this yarn out...

Posted by Kathleen in Ormond Beach at 8:38 AM 4 comments:

Away from the lovely grip and softness of my Addi Naturas and into the fastlane of Addi Turbos. Not sure if these are really turbos, but they are Addis and they are fast-knitting because of the slick, silver needles. 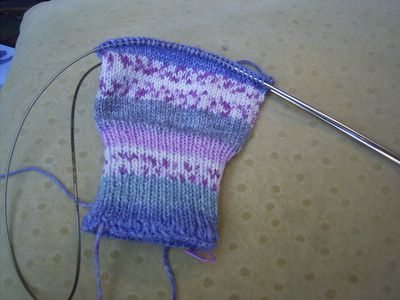 And now I'm not knitting on my Addi Naturas wondering when, during the second sock, they will give up on life and snap in half. I'll just keep hoping they come out with a miracle bamboo that can withstand my radical knitting style. Mom on the other hand, has been knitting with one pair of Crystal Palace bamboo #1 circulars since we both bought our first pair a year and a half ago. I guess the pencil style of holding needles puts a lot less strain on the needles and hers have lasted already through half a dozen pairs of socks. 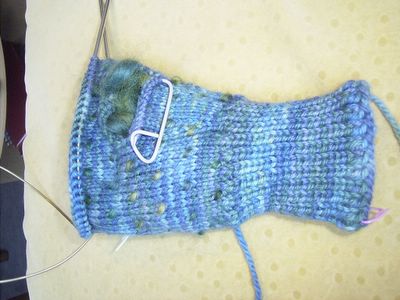 Getting down to the last half of the second mitten. The thrumming is starting to go quicker than before and I don't dislike it as much as at the beginning. Hopefully I will have Paulina's Christmas present finished before she returns to Finland in two weeks :) There's a pretty good chance actually, since this project is also on Addi Turbos.

Gee, can't figure out if I'm an advocate for or against Addis...... Bet if there's and Addi rep reading my blog, they're just hoping I'll shut up altogether LOL.

But it gets better. I found more new sock yarn from Socka yesterday with all sorts of cool new stuff in it. Need to see what it's called in English and I'll post again tomorrow.

Posted by Kathleen in Ormond Beach at 5:33 AM No comments: 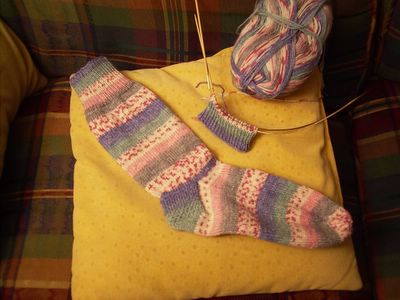 My snarky feelings are being saved up for the makers of Addi Naturas. Those that make the heroin that they call 2.5 mm bamboo needles, but only make them strong enough to last for one pair of socks. I tried my luck on the KnitList, but it seems I'm not the only one with this expensive addiction and rotten luck. So I guess it's back to metals when these ultimately snap....I've heard the Addi turbos are good :)

Posted by Kathleen in Ormond Beach at 2:51 PM 1 comment: