Can't concentrate long enough to write anything tonight. But who cares about wool right now (I can't believe those words just came out of my mouth!) when there's a brand new sparkly on my hand!! The Irishman came through :) Resizing will be done tomorrow, but more importantly, I's gettin' married!!! 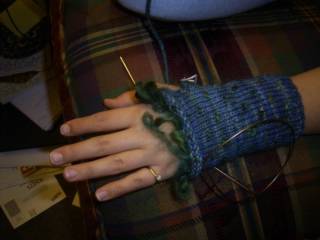 Mitten is as tight as the ring - I think I hear frogs in the distance......

Posted by Kathleen in Ormond Beach at 4:24 PM 3 comments:

Me: Who's there?
Troll: Troll
Me: Troll Who
Troll: Does it matter?
Me: Not really - just go away. My mittens look freakish enough as it is. 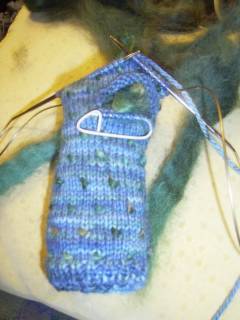 Notice how the top of the mitt isn't as ...umm...poofy as the beginning. I started using my roving twice in a twist. That's right. Cheating girl, right here. Pull off one tuft, knit it once and then, three stitches later, knit it again. Then I called Mum for mitten support - she's a seasoned thrummer - and she said, she double dips as well with the Fleece Artist roving. Thank God! See? It must be in my blood.
Unfortunately, algae from the frog pond is starting to infect my blood as well. Now that I'm past the thumb and all-over that thrumming thing, I really don't like the ribless cuff. It's going to be all puffy and some poor soul will have to try and stuff it in the sleeve of a winter jacket. I might end up calling this a trial mitten and run screaming for the safety of K1P1.
The upshot is, I could probably knit and reknit these mittens for a year without complaining. This is by far the nicest wool I've ever knit with - I mean like really nice, not just soft or with pretty colours. But with all of those things and something else I can't describe. I have to repeat the recipients name over and over in my head because with every stitch, I convince myself more that she doesn't need mittens or wouldn't appreciate the work or probably wouldn't like the colours.
Or maybe I just need more sleep....

Posted by Kathleen in Ormond Beach at 4:38 PM 1 comment:

Knit, knit, knit - thrum, thrum, thrum. This is moving a lot faster than I thought it would - consdering the 48 free minutes I have to work on it every night (well, some nights it's 49). God willing and the creek don't rise, I'll actually have these done before the first snow falls. Not so sure about its mate, though. 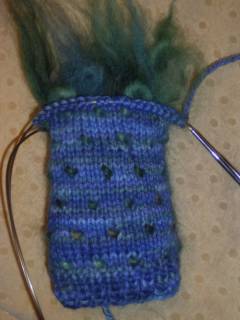 The beginning of Grover's Hussy Neckwarmer. Also known as: how much alcohol can we fit in one photo. There were other people attending, I promise! 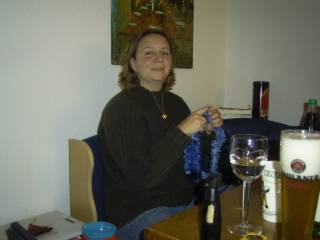 (Mum will be so proud that I remembered to lift my chin for the photo. You can't tell, but I'm sucking my stomach in as well.)

Alcohol? What alcohol? All I see is lots of satly snacks and Neal's mum sneaking a peek at Iveira's cards. 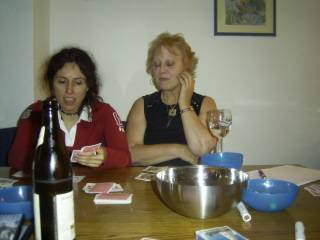 We're going to have to do this one again - it was quite possibly the most confusing game of rummy I've ever played in my life. How can rummy be confusing? Easy, just change the rules with every new hand. Like: okay, this time around you need to have 2 three-of-a-kinds and one straight-of-four and the next hand is 1 three-of-a-kind and 1 straight of seven cards. I think I've found the ultimate drinking game - if only I could handle more than 2 drinks in one evening...we'd have us a proper UGA Saturday Night :)

Posted by Kathleen in Ormond Beach at 4:52 PM No comments: 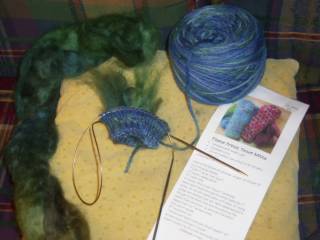 Here's a pretty little picture of my pretty little thrum world.
I decided not to sit in the corner but to try and start the mittens tonight - give it the ol' college try. The Fleece Artist directions scared the bejesus out of me at first, but after the first thrum row I found it to make a lot more sense in person than on paper.
Turns out the tought part is getting the roving off of the roving roll. "Simply pull a 4 inch lock of roving off and...." turns out to be on par with "to build a house, simply pull a board of wood off of this tree and ..." I figure I'll get the Irishman to pull off the roving for me (a couple of well-placed "oh my, what big muscles" comments and this house will be floating in roving tufts).
Speaking of tufts. Is it me or does my mitten look like one of those troll dolls that use to be all over the place? 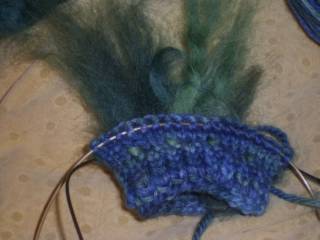 Posted by Kathleen in Ormond Beach at 5:18 PM No comments:

It's Time to Play the Music

It's time to light the lights
It's time to meet the Muppets on the Springer Show tonight.

Really wishing I had figured out this picture thing right about now. Will have to work on that tonight.

The story starts last year when my sisiter gave me two balls of some fun-furry type yarn. It was cream-colored and somewhat posh when I knit it up with Turkish stitch. Now fast forward to last week - when I decide to pick up posh scarf and finish it. I happen to have it with me at work when I realize that a scarf would be a perfect gift for a work colleague who is moving to France in a matter of weeks. Sandrine also happens to be French, so she realizes the important relationship between posh scarves and French women's necks. She liked the furry posh scarf I was knitting and we rushed off to the nearest wool shop for some furry yarn. She picked a blue-mix yarn and I promptly started knitting that evening. Halfway into the following Saturday morning I look at the pathetic 8 inches of scarf I had cranked out and decided stripes and furry yarn and mixed blues are about the ugliest thing this side of a French sneer. In a Tony-the-Tiger-in-Drag sort of way.
So, in an effort to be clever and charming, I decide to knit the scarf sideways.

Have I ever done this before? No

Do I have any idea how to go about this? NO

Do I search the internet and my books for ideas ? NO, NO, NO

I count stitches - the 31 stitches I cast on is about 6 inches wide - so that means about 10 st per 2 inches and 60 st per foot. I figure I should make the scarf 6 feet for that premium chic drape effect - so that's 360 stitches. Cast on and go baby - don't look back, just knit those 360 stitches (actually 359, but I really don't want to be the one to count and make sure) back and forth until you go crazy.

Actually, it's not that bad. I've decided this sideways scarf thing is the way to go - it may be a long ass row, but I like it a heckuva lot better than Knit Turn Knit Turn Knit Turn Knit Turn Scream.
Now, back to the title of the blog. This scarf has actually turned to be quite appropriate for its purpose. It's soft, fuzzy, slinky and the blues look gorgeous all mixed together-tres chic, non?. But......I can't help thinking of Grover in a red, sparkly mini-skirt and matching pumps with this thing wrapped around his neck. And you thought Ms. Piggy would star in the Muppet's Moulin Rouge.
Sooooo glad my work colleague has a sense of humor! I really hope she doesn't read knit blogs ;)

Posted by Kathleen in Ormond Beach at 4:10 AM No comments:

This is my mission: should I choose NOT to ignore it and pretend cooking tomato sauce or baking brownies have priority. I need to figure out how to get this button onto my side bar so that I can participate in correlating knit-along and not look like a blogging retard. Geeze, I have enough trouble not looking like a knitting retard - one handicap at a time, please.

Don't you sometimes wish life was like golf - less points is good, handicaps mean you're talented and drinking beer through the whole thing is the norm!!!


Posted by Kathleen in Ormond Beach at 2:45 PM No comments:

Because I'm all continental and stuff I get espresso every afternoon at about 3. The Italians brew it up fresh in the kitchen with some sort of whipped cream with coffee and sugar topping - YUM!! But this morning, Roger decided he needed a pick me up so we got our little volt of electricity bright and early.
So, now I'm hanging from the ceiling listing off hundreds of things I have the energy to do - like run around the block 20,000 times without pause. Or maybe knit a hat for everyone I know because it's the best Extra Stash Burner I know of. A friend of mine once suggested I crochet granny squares from all my leftover yarn and make a big afghan - but then I tried crochet and decided I didn't want a million granny squares hanging around the house waiting to be sewn up (like the rest of my knit projects).

But I figure hats have the following benefits:
1. can be knit in the round (no sewing!!)
2. can include different kinds of yarns (with a bit of EZ dec/inc finagling)
3. can be quickly knit - like in one night
3. can leave the house as soon as their finished!!

Thereby making hats the premier destashing project of choice. For now. It's also a premier time-filler while I stare at large quantities of collected wool and pray for a project to form in my head that ISN'T a poncho. The Irishman has promised to shoot me if I try to make a poncho. Must. resist.poncho.craze.
But, really, if these are the only things that make my knitting life difficult - bring it on! I think I need another espresso - a little more sugar in this one and I'll start sounding like Tweak in South Park-just call me Twitch! :)

But, I am seriously considering the thrum mit-a-long with Stephanie. I picked up a Fleece Artist kit in Yarmouth, but I can't make head or tails of the directions. All sorts of evil "knit into the stitch below" nonsense and worse. My conniving self is thinking this is a good time to get support on the whole thrum conundrum. Thrum Conundrum.....Sounds like a Disney song - see? I told you it was evil!
Time to get off the ceiling and get some work done!
Ciao!

Posted by Kathleen in Ormond Beach at 5:47 AM No comments: 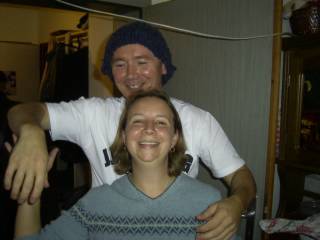 Posted by Kathleen in Ormond Beach at 9:01 AM No comments: