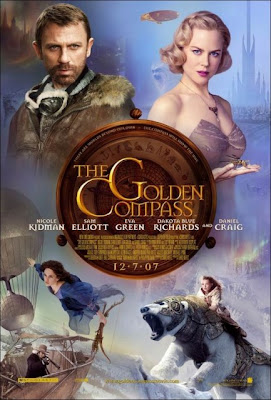 I was just in the middle of the coolest film. There were child-heroes, action, adventure and cute, cuddly animals. I literally jumped out of my seat a couple of times, there were nearly tears towards the end, Nicole Kidman totally weirded me out (all systems normal there) and Sam Elliot was his typical reassuring self that made me feel safer for the characters he was around to save the day when necessary.
At the end of the big action scene, without pomp or circumstance, just a couple of lines from the kid actors.....the screen went dark and credits started rolling. I was soooo into this movie and the story and the characters and the whole world they built up. Cool graphics and scenery and everything
and now I'm left wondering if I just paid ten bucks for a trailer.....
p.s. That being said, I won't hold it against the nice characters, daemons and Sam Elliott. I can't wait for the sequel!!
p.p.s. Did anyone catch Lyra's hat? The bulkiest yarn known to man and a little elf peak in the back - how cute would that be for Christmas??!!
Posted by Kathleen in Ormond Beach at 11:18 PM 1 comment: