One day, in a small Gulf Coast town in Texas, when I was about knee-high to a gnat, I was colouring with my cousin Jeannie. I was jealous as all get out because she was easily chatting away while outlining pictures in dark crayon and shading the figures and mixing colours - I, on the other hand, had half a tongue hanging out of my mouth (Charlie-Brown-style) and sweat on my brow as I simply tried to stay within the lines. The whole way home to Houston, I dreamt about the day that I would use crayons to do outlining and shading in my Mickey Mouse colouring books.

Sadly, I am not the brilliant Crayola Shading Artist I dreamed I'd become. Crayons gave way to coloured pencils, which gave way to cameras, which gave way to blogging. (Jack of all trades, master of none?).
In an effort to amuse myself further with hues from the rainbow, I finally tried my hand at dying wool. Last night's results weren't too solid, they all came out a bit lighter than I'd hoped, see light pink yarn here from the hearty red packet. ( I've committed to making these skeins blood red in time for Halloween, darnit!) 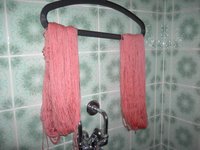 Completely flustered and out of Kool Aid and Batik dyes, I grabbed the nearest thing I could think of: a packet of Crystal Light Raspberry Ice and came out with a much darker (and way cool!) tone. 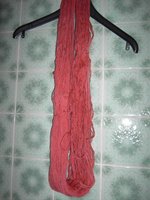 ´
Ms. Mayor of Doubtsville thinks it might end up a bit sticky. Maybe so, but the colour is still really cool! There's gotta be some sort of need for sticky yarn, eh? Maybe a hat that 2 year old fingers finally can't pull off the head while in the stroller..... 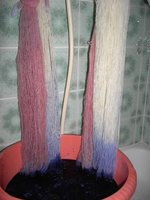 Today I went shopping at Idee in Nuremberg and found loads of proper dyes, dyeing bottles for painting and pipettes for just general messing around. The light amythest from last night has been submerged into King Blue and the tips of my Briggs and Little Sock Yarn for my space-dyeing attempt. (I can't just try dyeing and work in other techniques later - I have to try dyeing skeins and also figure out space dyeing at the SAME TIME!! and buy bottles and pipettes to play with yarn and fleece painting RIGHT THIS SECOND!)

Because it's not just about scribbling in your Mickey Mouse book and being happy playing with colours - it's about being able to do all the techniques everyone else can do on the first try, right? Or at least the second try......otherwise I'm going to end up with lots of over-dyed black and browns ;)

Ciara's Quote from the weekend: I never thought dyeing yarn could smell this good.

How do you like the Groovy Green tiles in my downstairs bathroom?

Also, at Idee, I found this pull-chain music box. How sweet is this??!! I just need to figure out something to knit around it and which chubby-cheeked drooler is going to get it. 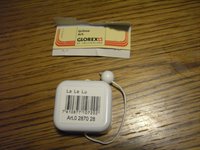 (probably whichever one doesn't end up with their fingers stuck to a Crystal Light toque).
Posted by Kathleen in Ormond Beach at 3:08 PM